California – People and pets have been taking to the trails and enjoying the outdoors as California has been experiencing a super bloom this spring. Northern California’s peak season for blooming wildflowers is just beginning as Central and Southern California’s super bloom is coming to an end, according to Visit California’s website. However, a recent incident involving two dogs being bitten by rattlesnakes has brought a sobering awareness to the dangers lurking outdoors at this time of year. 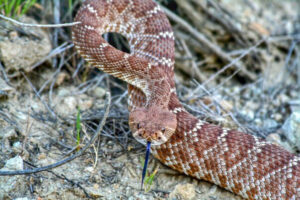 The two dogs bitten by rattlesnakes were not on a hiking trail but at a dog park in the San Fernando Valley. According to one witness who spoke to KTLA , one of the dogs yelped after being bitten, ran down the hill, collapsed and died. The other dog received medical attention and is currently recovering.

“Dogs are about 20 times more likely to be bitten by venomous snakes than people and are about 25 times more likely to die if bitten,” the Animal Medical Center of Southern California‘s website states. “Snake bites are life-threatening, extremely painful, expensive to treat, and can cause permanent damage even when the dogs survive.”

Spring and summer are the seasons when rattlesnakes are most active as the weather gets warmer and the snakes are mating. Not to mention, rattlesnakes “live in a variety of habitats, ranging from wetlands, deserts, and forests, and from sea level to mountain elevations,” according to Animal Medical Center of Southern California.

The following precautions can prevent your pet from suffering a venomous snake bite: 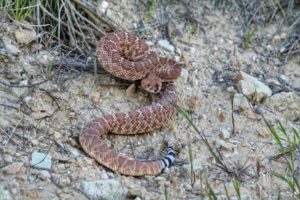 “The canine rattlesnake vaccine…is meant for use in healthy dogs to help decrease the severity of rattlesnake bites,” states the website for the Animal Medical Center of Southern California. However, the vaccine does not protect dogs from all types of rattlesnakes.

The bottom line to keeping pets safe from rattlesnakes or other dangers is by not letting them run free or off leash outdoors.